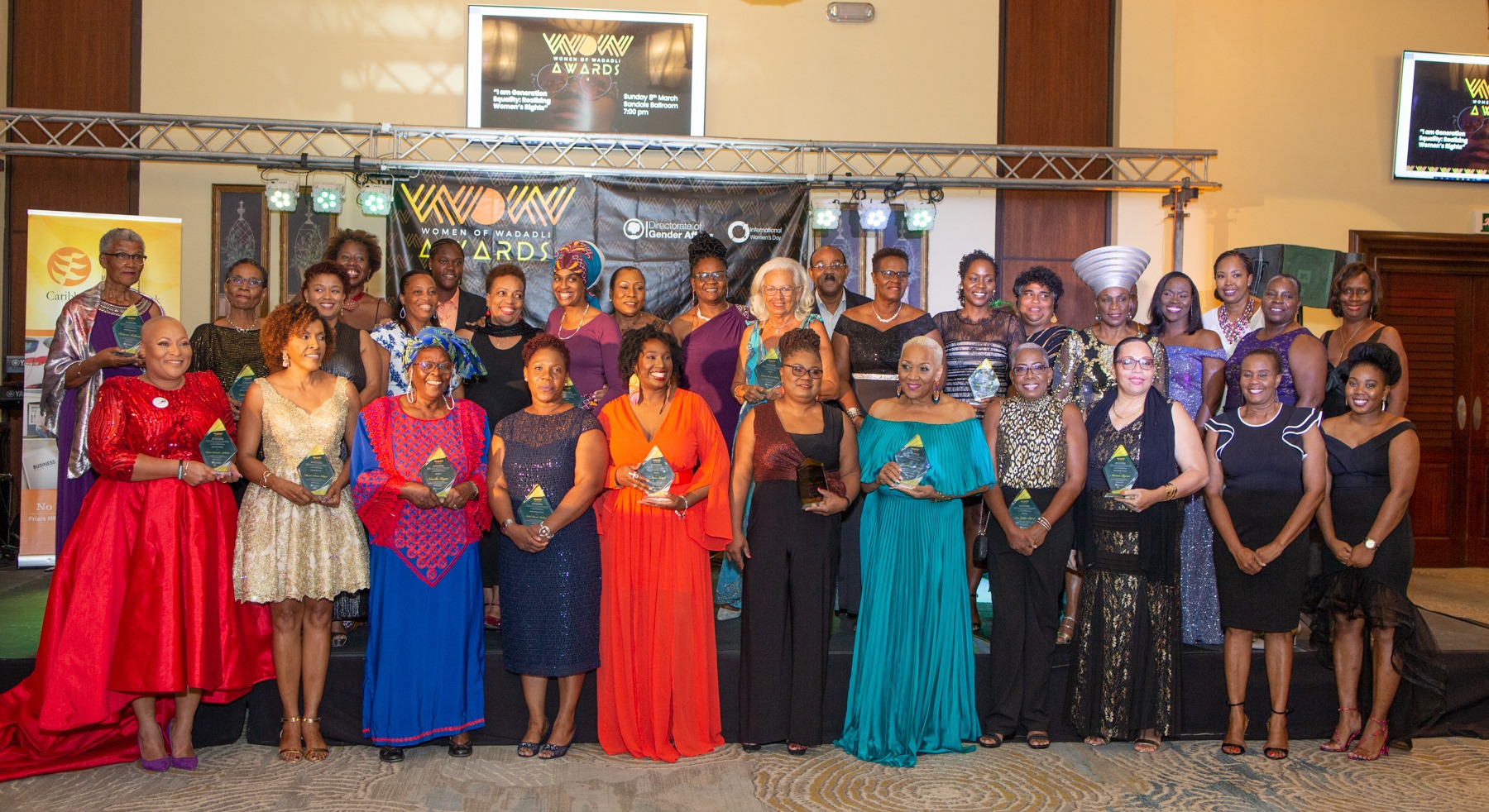 By administrator12 December 2020No Comments

St. John’s, Antigua] –– Last evening the Directorate of Gender Affairs (DoGA) within the Ministry of Social Transformation, Human Resource Development, Youth, and Gender Affairs honoured 25 women and one private-sector agency for their outstanding service to the nation of Antigua & Barbuda at the Women of Wadadli Awards Gala.

The event, held at the Sandals Grande Antigua Resort, was the first national award ceremony of its kind designed to specifically highlight women’s contributions to national development and promoting gender equality.
DoGA Executive Director, Farmala Jacobs, said that this year’s celebration of International Women’s Day is especially significant and that the Woman of Wadadli Awards aimed to recognize the unsung heroes among us.
“This year marks the 25th anniversary of the Beijing Declaration & Platform for Action. Women have made and continue to make remarkable contributions to the development of Antigua and Barbuda. These contributions can often be overlooked so we decided to spotlight the work of women in this year’s International Women’s Day activity.”

Adopted in 1995 in Beijing China, the Beijing Declaration & Platform for Action outlines twelve (12) critical areas of concern including women’s education, political participation, healthcare, and the girl child, and is considered the most progressive roadmap for the empowerment of women and girls globally.

The awards were distributed in three (3) categories. The Woman of Wadadli Awards were presented to women of at least 30 years of age who have made exceptional contributions to their specific field of interest and the empowerment of women and girls nationally.

The Minister of Gender Affairs Woman to Watch Award was given to a woman under age 30 making significant progress in her profession, and the Dame Gwendolyn Tonge Lifetime Legacy Award was given to a woman over 55 years of age who has made significant contributions to national development and the promotion of gender equality throughout her lifetime.

An additional award, the Prime Minister’s Corporate Citizen Award, was granted to a private sector agency that promotes gender equality through its policies and programmes.
The selection committee selected the following list of winners from a field of approximately 100 nominations.

In her presentation at the ceremony, Honourable Minister of Social Transformation, Human Resource Development, Youth, and Gender Affairs, Samantha Marshall, recognized the awardees as activists in their own right, noting that Civil Society Activism is essential to good governance and to achieving the goal of gender equality.

The Woman of Wadadli Awards Gala was sponsored in part by the Caribbean Union Bank (CUB). CUB’s General Manager, Karen Richardson noted the importance of promoting women’s empowerment in the banking sector to sustainable development.

“Small businesses, are the drivers of the economy and women are increasingly becoming entrepreneurs. As a local institution, Caribbean Union Bank is pleased to offer financing

options to these businesses and we are also especially pleased to partner with the Directorate of Gender Affairs on the Women of Wadadli Awards,” she said.

The business categories were sponsored by the Antigua and Barbuda Employers Federation (ABEF). The President of the ABEF, Sherrie-Ann Brazier assisted with the distribution of the awards for the following five (5) categories; Banking and Finance, Business, Industry and Commerce, Culinary Arts, Tourism and Trade Unionism.

Recipient of the Dame Gwendolyn Tonge Lifetime Legacy Award, E. Ann Henry QC offered a response on behalf of the awardees. In her remarks, she expressed gratitude to the Ministry of Social Transformation and the Directorate of Gender Affairs for the recognition of women. She also reminded those present that while “One woman can make a difference, together we can rock this world.”

The featured speaker Amina Doherty congratulated all awardees for their hard work and dedication to improving the lives of women and girls.
The year 2020 also marks 40 years since the founding of the Women’s desk, the agency that ultimately became The Directorate of Gender Affairs. Two members of the organization’s staff, Mrs. Sarathine Mayers, and Mrs. Keren Isaac were awarded for over 30 years of service to the department.

DoGA is the national gender machinery and focal agency for gender development within the government Antigua and Barbuda.